THE LEGEND OF NEWT KNIGHT
AND THE FREE STATE OF JONES

Newt Knight was born in Jones County, Mississippi, in 1837 near the Leaf River in a region of Mississippi known as the Piney Woods.  In 1858, Newt married Serena Turner, and they soon moved into the southwestern corner of Jasper County establishing their homestead near present day Stringer, Mississippi.

As a yeoman farmer, Newt would have grown corn and sweet potatoes and raised cattle and hogs and other produce associated with a subsistence farmer.

According to Newt’s son Tom, Newt was a Primitive Baptist who did not drink or use profanity.  A man of myth and legend, Newt would become one of the greatest unsung guerilla fighters in American history.

The Beginnings of War

After the election of President Abraham Lincoln in November of 1860, mid-level slave owners led Mississippi into seceding from the Union in January of 1861. In The Journal of the Mississippi Secession Convention, the ruling class clearly stated their reasons for secession:

“Our position is thoroughly identified with the institution of slavery, the greatest material interest in the world….”

In 1860, slaves made up only 12% of the population of Jones County, and the white subsistence farmers of Jones County soon realized that they had little stake in a war to preserve slave profits of the wealthy.

In April 1861, the American Civil War began.  Like many yeoman farmers of the Piney Woods along with the largest planters along the Mississippi River, Newt Knight was opposed to secession and the war.

On May 13, 1862, Newt Knight enlisted into Company F of the Seventh Battalion, Mississippi Infantry in Jasper County.  In an interview shortly before his death in 1922, Newt maintained that the Rebels would “ just send squads around to come get you.”  Newt maintained that he agreed only to serve as an orderly, to care for the sick and wounded.

By the spring of 1862 Confederate authorities painfully realized that not enough Southern men were responding to the call to war.  In response, they introduced the first military draft in American history.

Then on October 11, 1862, the Confederate Congress passed the infamous  “Twenty Negro Law” which exempted from military service one white male on every plantation that had twenty or more slaves.

At this juncture, Newt’s comrade, Jasper Collins, expressed his outrage by announcing “This law makes it a rich man’s war and a poor man’s fight.”  Collins would be among the first of the Jones Countians to throw down his musket, leaving the Confederate army for good.

Shortly after the departure of Jasper Collins, Newt learned that Confederate authorities had seized his family’s horses.  In November of 1862, Newt went AWOL or absent without leave, west of Corinth near Abbeville, MS, beginning his two hundred mile odyssey back to Jones County.

Upon his return to Jones County, Newt discovered that many Jones County citizens, particularly women and children, were destitute.  Under the guise of the “tax-in-kind” law, the Confederate Cavalry took meat from their smoke houses and corn from their cribs and cloth from the women’s looms, allegedly for use by the Confederate armies.

However, much of the seized foodstuffs was kept for personal use by the Rebels, or sometime they even sold the goods in markets in Mobile.  Essentially, the Confederate authorities took anything they wanted from the people, leaving the home front demoralized and impoverished, while forcing their men into the army.

In May 1863, the Seventh Battalion was sent to Vicksburg.  When Newt refused to return to the Confederate Army, he was taken prisoner and was tortured and treated cruelly. His friends later testified that Confederate authorities destroyed everything he owned, taking his horses and mules and leaving his family destitute.

After the fall of Vicksburg in July of 1863, thousands of Confederate soldiers deserted and many of those returned to Jones County.

In August of 1863, Confederate Major Amos McLemore was sent to Jones County to round up deserters.  On October 5, 1863, Major McLemore was shot and killed at the home of Amos Deason in Ellisville, MS.  Although no one was ever charged in the killing, Newt Knight was later blamed as the triggerman.

McLemore’s death signified the beginnings of a full scale rebellion against Confederate authorities.  Newt Knight quickly put together a company of approximately 125 men from Jones, Jasper, Covington, and Smith counties to defend themselves and their families against the Confederates.

Newt was elected captain, and they would be known as the Knight Company and later as the Jones County Scouts.  Newt Knight was an outstanding guerilla leader and news of his revolt against the Confederacy soon reached the desk of Confederate President Jefferson Davis.  Newt’s weapon of choice was a muzzle loading, twelve gauge double barrel shotgun that, according to one Knight descendent, he could reload before the smoke had cleared from the first blast.

To avoid capture, the Knight Company would take to their swamp hideouts such as Devil’s Den, Panther Creek, and Sal’s Batree, the latter named for Newt’s shotgun,” Ole Sal.”  They communicated with each other by blowing signals into hollow cow horns.  Local women aided the Knight Company, particularly a slave woman named Rachel who supplied Newt with food and information in the swamps.

The Free State of Jones

The Natchez Courier reported in its July 12, 1864, edition that Jones County had seceded from the Confederacy.

Whether the “Free State of Jones” actually seceded or not has often been debated, but Newt and Jasper both denied that Jones County seceded from the Confederacy.

They maintained that Jones County had voted not to secede; they were still in the union. Regardless, in the spring of 1864, the Confederate government in Jones County was effectively overthrown as the Knight Company raised the United States flag over the Ellisville Courthouse.

In April of 1864, Confederate officials sent Colonel Robert Lowry and two regiments of soldiers along with packs of bloodhounds into Jones County to flush out Newt and his men from their swamp hideouts.

After Lowry and his soldiers withdrew from Jones County, Newt and his men re-emerged from the swamps and would continue to defy Confederate authorities.  Newt Knight was never captured by the rebel authorities and, in April of 1865, the Confederate States of America collapsed.

In order to fully appreciate Newt’s character, his beliefs, and his Unionist loyalties, one must look at his postwar Reconstruction activities.  Immediately after the war, Newt worked with the United States Army and the Freedmen’s bureau.

He served as a relief commissioner where he distributed thousands of pounds of food to the starving people of Jones and surrounding counties.  He was also sent to rescue several black children who were still being held in slavery despite the outcome of the war.

When Mississippi’s post-war provisional government refused to recognize the civil rights of African Americans, the state was denied reentry into the Union.  As a result, from 1867 until 1876, Mississippi was under Radical Reconstruction, the objective of which was to protect and extend political rights to African Americans.

In pursuit of this goal, Newt would work closely with Mississippi’s Republican Governor, Adelbert Ames.  In 1872, Newt was appointed as a Deputy United States Marshal where he would defend the Republican government and voters from the Ku Klux Klan. The resurging Democratic Party was attempting to undermine the goals of Reconstruction by depriving African Americans of their newly won political rights.

In 1875, in a final attempt to protect the voting process and the fragile democracy, Governor Ames appointed Newt Knight as Colonel of the First Regiment Infantry of Jasper County.  This regiment would never muster because in the statewide elections of 1875, the Democratic Party, through fraud, intimidation, and violence, successfully kept African Americans and Republicans from voting, with the result that Democrats bent on white supremacy were swept back into power.

It would be over a 100 years before political rights would be restored to African Americans.

After the collapse of Reconstruction in Mississippi in 1875, Newt retreated to his farm in Jasper County with his wartime ally, the former slave Rachel.  In 1876, Newt deeded Rachel Knight 160 acres of land thus making her one of the first African American landowners in Mississippi.  After Serena’s departure, Newt and Rachel were married at a time when it was dangerous for a white man to cohabitate with a black woman.  Nevertheless, they remained together and had several children.  Despite the danger, Newt often said, “ there’s lots of ways I’d rather die than be scared to death.”

On February 16, 1922, Newt Knight died of old age at the age of 92. In defiance of a state law which prohibited blacks and whites to be buried in the same cemetery, Newt was buried in a pine box beside Rachel  in the Knight Family Cemetery, on a high ridge overlooking his homestead.  The inscription on his gravestone reads “he lived for others.” 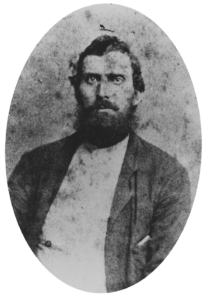